And, catching up with another old item…

In early August of last year, the Japan Space Elevator Association (JSEA) held their third annual JSETEC (Japan Space Elevator Technical & Engineering Competition) event.  16 teams competed in this event, an event that had, at the highest point, a nearly 600 meter long ‘race-course’.  Just recently, JSEA posted their English-language version video summary of the competition.  You can find it at this JSEA website page (the top version is in Japanese, the bottom one is in English).

But there were differences too… 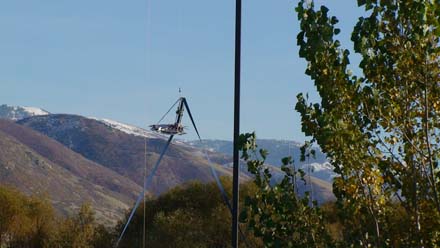 And the idiomatic differences in language, shown in the Japanese video, are much appreciated too.  I think my favorite was the description of the “Belt tether patched by execution committee”…

You know, so many times you don’t appreciate what you have until it’s gone.  I miss our power-beaming Games, I really do.

This is a fine video – check it out.  It’s 14 minutes, 25 seconds long and very much worth your time.  And, for the next JSETEC competition, the Japanese aim for a height of 1,200 meters – higher than the winning run of the 2009 Power-Beaming competition.

(Picture thumbnail is of the USST Climber and the tether which broke while they were attempting a Climb.  Click on the thumbnail to see a full-size version of the picture).