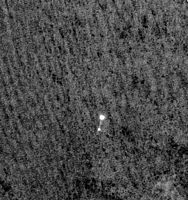 This is a picture (already seen by many) of the Mars Phoenix probe, descending to the Planet Mars on Sunday.  You can clearly see the deployed parachute and the probe underneath it.  It was taken by the HiRise camera on the Mars Reconnaissance Orbiter.

Congratulations NASA and all of the other organizations that assisted in this effort!

(Picture from here – click on the thumbnail for a larger version)

2 thoughts on “The coolest photo ever?”