Bert Murray, Captain and Fearless Leader of the NSS Space Elevator Team, emailed me to let me know that their team recently did a demo for a BBC news/film team.

The following is a note posted on the News section of the Team website:

“We had a lot of activity this weekend! The BBC flew in from London to film our prototype test of the climber. We started the day filming the battery operated climber which shot up the tether and broke. Then, we went outside and used a 10,000 watt spotlight to power the solar climber. We were pretty nervous, but it was a success. The climber ascended 100 feet up the tether. The BBC was happy with their material from the shoot, and we are looking forward to the airing of the BBC show. Here is a video from the day.”

Incidently, if you didn’t know that the NSS team had their own website, well neither did I 🙂

In that News post, there is a very cool video of the BBC shoot and the climber test (complete with European Dance/Trance music).  What is even cooler is that NSS has also posted a video slideshow, showing team members, close-ups of the Climber, etc., also accessible from their website’s News section.

I’ve taken the liberty of posting two photos from the Slide Show, below.  Click on them for the full-size version (or, better yet, visit their website to see the whole selection – I mean, where else can you register to win a ‘Celestial Design’ Quilt in a raffle?). 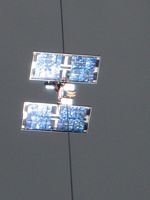 On the left, you can see a a closeup of the underside of the Climber in flight.  The underside is illuminated with a 10 kw spotlight; the illuminated cells show clearly. 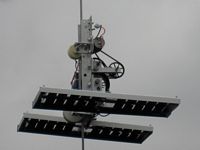 Here is a close-up of the Climber itself.  You can clearly see the steel cable it is designed to ascend (a major change from previous competitions in which a ribbon was used). 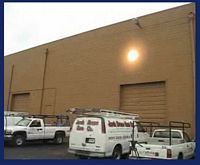 Finally, I pulled this photo from the video.  It shows the 10 Kw spotlight used to power the climber being ‘tuned’ on the side of the building.  It kind of reminds me of this video of the Kansas City Space Pirates when they were ‘tuning’ their mirrors…

3 thoughts on “News from the NSS Space Elevator Team”