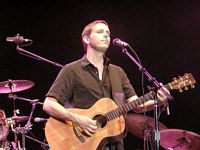 A few days ago, I wrote about a new song that Glen Phillips had written called “Space Elevator” and how much I enjoyed it.  I’d like to note that Glen will be appearing in concert at the Fox Theatre in Redwood City, CA next monday, February 18th, 2008, at 8:00pm.  You might want to check it out.  Glen is also coming to Chicago in April of this year (as part of this same US tour) and I definitely plan on attending his show then.