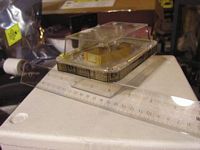 One of the new entrants into this year’s Space Elevator Games is LaserMotive.  Now, I’m not privy to their plans or designs, but with a name like “LaserMotive” and a picture of a 1kw laser on their blog (and also shown here), I’m hopeful that  we will actually have at least one laser-powered climber in this year’s Games (note that USST brought a laser to last year’s competition, but couldn’t get it working in time).  It would be very cool to have multiple laser-powered vehicles competing this year; real competition using power-beaming devices envisoned to eventually power a real Space Elevator.

The project manager at LaserMotive is Tom Nugent, the same Tom Nugent late of LiftPort.  He emailed me a couple of days ago to point out a new entry in their blog; it seems that they have been visited by the BBC to “to interview us and to video some of LaserMotive’s early hardware during May as part of a documentary they’re working on about future technhology...”.

USST still has to be considered the favorites in this year’s Games.  They were the best team running in the first two competitions, missing out on the prize money by only 2 seconds last year.  But knowing Tom Nugent like I do, I’m pretty confident that they’re going to give USST very stiff competition.

(Click on the thumbnail, or visit the Lasermotive blog to view a larger version of the image of a 1kw laser)