One of the items which popped up in my FeedDemon Reader a while ago was a Blog post from a group called Sustainable Nano. They are: “The Center for Sustainable Nanotechnology is an initiative funded by the National Science Foundation to carry out research that will enable the development of sustainable, societally beneficial nanotechnologies. We are a group of well-connected but geographically diffuse scientists—at the University of Wisconsin-Madison (Hamers & Pedersen groups), University of Wisconsin-Milwaukee (Klaper group), the University of Minnesota (Haynes group), the University of Illinois at Urbana-Champaign (Murphy group), Northwestern University (Geiger group), and the Pacific Northwest National Laboratory (Orr).” It’s a neat website with plenty of interesting posts – I do like poking around in it.

Anyway to the post in question: “Space Elevator: A Lasting Dream for a Sky-reaching Tree“. The post describes the basics of the space elevator and how a product like carbon nanotubes, one of their group’s focus, could make it all possible. Pretty standard stuff, but the graphics are worth commenting on…

The first graphic shows how a space elevator is “held up” by using the comparison to holding a stick with a rope attached to it and, the other end of the rope attached to some sort of counterweight. Spin the rope about your head (or, in the post’s example, spin your entire body) and, if you’re going fast enough, the rope will stick out straight from you towards the counterweight simulating the appearance of a space elevator. This is a common enough analogy, but does have its flaws. A space elevator is held up by balancing the forces of gravity and centrifugal force but this analogy is only demonstrating the centrifugal force portion. You (or the stick) have taken the place of gravity by holding the “earth-end” of the tether and keeping the counterweight from flying away. But I can’t think of a better way to demonstrate it and it does have the advantage of quickly being able to demonstrate the basic idea. In the graphic though, it shows Geostationary orbit (GEO) much closer to the counterweight than to the earth and the center of mass of the system at GEO (that’s where the arrows in the graphic seem to be pointing to). Using the standard Edwards/Westling model, the elevator tether is 100,000 km long while GEO is approximately 35,700 km above the surface, i.e. much closer to earth than to the counterweight at the end of the tether. Regarding the location of the center of mass of the system, it needs to be above GEO.  I, myself, used to erroneously think that the center of mass would be at GEO and have visited this topic before. Dr. Blaise Gassend wrote up a simple explanation of why the center of mass has to be ABOVE geosynchronous (geostationary – GEO) orbit.

The second graphic, the one referring to the almost-certainly necessary taper of the elevator tether is one that I’ve seen in similar format several times before. I’ve wanted to address it before, but just haven’t – I’ve been too lazy to try and draw my own version of the “correct” ratios for a tethered taper (I’m just familiar enough with Photoshop to be dangerous…). You’ll note that the blog post shows the tether increasing from a point at the earths surface to something much wider at GEO and then reducing back to a point at the counterweight. Ignoring the location of GEO (the same as in the first graphic), the idea of the tether widening from the earth to GEO and then narrowing from GEO to the counterweight is correct. But the ratio is wrong: 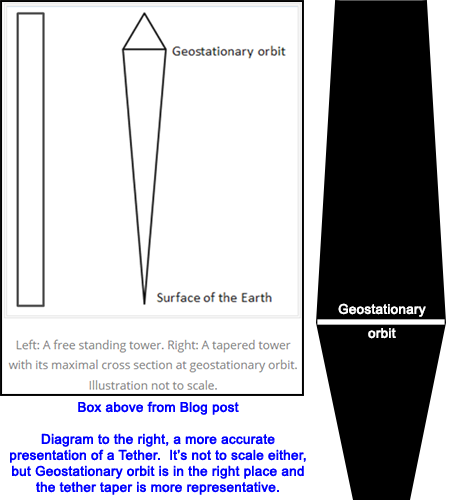 Creating my own model took me a lot longer than I had first thought – I redid it a half-dozen times before I had something I thought was worthwhile. Of course it’s not to scale either, but the ratio of the taper width at the earth’s surface (13.52) to its width at GEO (35.44) to its width at the counterweight (23.88) is correct. Also, given the shown length of the tether, the location of GEO is correct. The graphic is greatly “squooshed” of course, being much shorter than a real tether in this scale (by several orders of magnitude). But the difference between the length and the width of the tether demands this type of alteration.

One other thought; I think when most people look at drawings of tether taper, they assume that it’s the width of the tether which must alter. That’s not necessarily the case. It can also be the thickness and that, I think, would have advantages. If the width of the tether was constant (once you’re above the atmosphere – in the atmosphere it may well be a cable), then you don’t have to design a climber which can accommodate varying widths; much easier, I think to design a climber for a tether with a varying thickness. But then again, maybe it will be something like a Hoytether.

Anyway, enough. Where did I get my numbers? They came from the most excellent spreadsheet developed by long time friend of the space elevator Maurice Franklin and which you can find by clicking on its page link at the top of blog (The SE Analysis Spreadsheet). I’ve blogged about this before, and I’d like to encourage readers to play around with it – when you do, you really begin to get a feel for the physical constraints that engineers and scientists have to deal with in the real world. I used his Edwards/Westling Baseline model with no changes.

7 thoughts on “GEO, the SE center of mass and tether taper…”