New to the conference this year was a competition to create an “Elevator speech”.  If you’re unfamiliar with the concept, the idea of such a speech is this; assume you’re in an elevator with someone who you want to convince of the need and usefulness of building a Space Elevator.  You have only a short time – it is an elevator ride.  In case you’re unfamiliar with the concept, there are several articles available – a typical one is here. 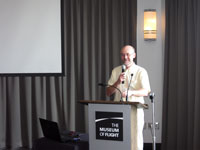 Conference attendee Peter Robinson came up with the idea and was in charge of the competition.  It was announced at the beginning of the conference and a sign-up sheet was available for all those who wanted to participate.  The competition happened today, just before lunch.  There were a total of 7 speakers and 4 judges (of which I was honored to be one).

This competition had a very practical aspect, making all of us who support the concept of a space elevator think in terms of convincing others, in a very short time, of the worthiness of the project.  I would expect this competition to become a fixture at future Space Elevator Conferences.