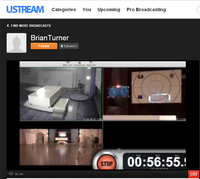 Over the past 25 hours, the Kansas City Space Pirates have been continuously flying a quadcopter, powered solely by laser beam.  At about 4:11am this morning, they passed the LaserMotive unofficial record time of 12 hours and 27 minutes.  Once they got the new record time, their goals shifted to double the previous record, or about 24 hours and 54 minutes.  They then slightly modified this goal to run a full 25 hours – and succeeded!

It was a very boring event, as you might imagine – watching a quadcopter hover a few feet above a target mounted on a table.  Very boring that is until about 9 hours into the record flight.  I had just tuned back in and noticed that the uStream feed was down (they DVR’d the entire run, but also broadcast it live on uStream so that people could watch in real time while it was happening).  I called Brian Turner, captain of the Space Pirates who, unbeknownst to me was taking a quick nap.  I apologized for waking him and he went to see what was wrong.  Once he fixed the problem (the cable modem for their internet feed to uStream had to be reset), he decided to sit with the crew and watch what was going on.  It’s a good thing he did because at about 9 hours and 10 minutes, a random air-current knocked the quadcopter off its target.  It started searching, moving in wider and wider swings, sending out messages about “Target Lost” and, more ominously, “Battery Low”.  Brian quickly grabbed the manual controls and brought the quadcopter back over the target.  Things settled down and the rest of the run was fairly uneventful.  I’m glad I woke Brian up!

No one officially judges or keeps tracks of records like these (their was no representative from Guinness at the original LaserMotive record flight or at this one), so the records are unofficial.  But they’re real nonetheless.  Having an aircraft continuously fly, non-tethered, for 12 hours as LaserMotive did or 25 hours as KCSP has just succeeded in doing, is very impressive and shows how reliable this type of technology can be.

KansasCity.com, the online version of the Kansas City Star, just published a story about this – a very nice summary of the entire event.