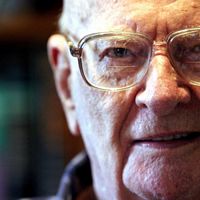 An oldie, but still goodie, and, with the Space Elevator Conference coming up in just a few days, this seems apropos…

One of his best books was the Fountains of Paradise, Sir Arthur’s concept of a Space Elevator.  The show devotes a good portion of time to the concept and also to Michael Laine, head of LiftPort, and someone very active in the Space Elevator community.

You can see the movie as it is occasionally re-aired on the Science Channel and also, online, thanks to the awesomeness that is YouTube.