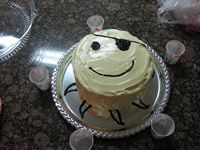 This past Friday, I had the pleasure of attending the official Kansas City Space Pirates ‘closure party’, a party hosted by KCSP Captain Brian Turner.  As I had posted earlier, KCSP has officially given up in their quest to win the NASA Centennial Challenge Power-Beaming competition (part of the Space Elevator Games). 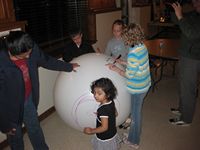 Brian rented out a community center in Kansas City and invited all team members and their immediate family (who, almost inevitably, got involved with the project too) to thank them for all of their efforts and to briefly review KCSP’s accomplishments in the three Space Elevator Games they competed in (2006, 2007 and 2009). 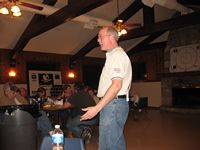 Brian brought the optics box and climbers, as well as balloons for the kids.  There was lots and lots of food, and enough beer and wine to go around (and a local police officer to make the alcohol officially legal).

Brian’s speech was gracious and inclusive, and he singled out every person there, talking about what they had done and thanking them for their contributions.  From Brian, I would have expected nothing less – he and the whole team was a class act and we are all sorry that they were not more successful in the Games. 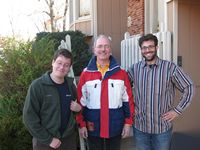 If anyone wants to pick up KCSP’s legacy and compete with LaserMotive in the future, please contact Brian (brian [at] kcspacepirates.com).  I’m sure their equipment (especially their optics and climber) can be obtained for a reasonable price.  But don’t wait too long as we’ll probably see bits and pieces of it up on Craigs List in the not-too-distant future.

I’ve included thumbnails of a few photos I took at the party.  The topmost is of a custom-made Pirate cake that Bryan’s wife made.  Very cool and very tasty.  Next is a picture of some of the children at the party drawing on one of the big balloons that Brian brought.  These are the same types of balloons that KCSP brought to the 2007 Games to use as ‘target-practice’ in sighting their mirrors.  The third picture is of Brian in mid-oration.  The last picture is of Brian, flanked by Dan (on the left) and Nic; the principals of the Chicago Video Production company, Bitter Jester Creative, Inc., the ‘chroniclers’ of the people-side of the Games.  They are located in the Chicago area, as I am, so we all drove down to the party together.  Nic and Dan took the opportunity to interview Bryan (extensively) and other attendees as part of their of project.  I can’t wait to see the final result – they literally have hundreds of hours of footage and it’s going to tell quite a story.

So, what does KCSP have in store for the future?  I’m going to leave that for a blog update on their part.  Suffice it to say that they have new challenges they are taking on, but they are staying close and true to their robotic roots.