At the 2007 Space Elevator Games, team LaserMotive made it’s first appearance.  Many of us who closely followed the runup to the competition had high hopes for this team’s performance.  They seemed to have all their bases covered, their climber was laser-powered (one of only two teams to be so), and enjoyed the assistance of a true laser expert, Dr. Jordin Kare.

Unfortunately, however, they were badly bitten by not being totally prepared in time for the competition.  It’s easy to point fingers afterwards and say that they could have done a better job, but they, like everyone else, are doing this in their spare time.  They have other things, like day jobs and family, that they have to balance with their Space Elevator passions. In retrospect, it was amazing that they had all of this equipment working at the Games – they were basically setting up a lab at the launch point every time it was their turn to make an attempt.

This time around, however, promises to be different. With a year’s experience under their belt, they are definitely loaded for bear.  On the official website of the Space Elevator Games, Ben Shelef has put up a series of posts about LaserMotive’s qualification.  To sum up, it appears that this team is READY… 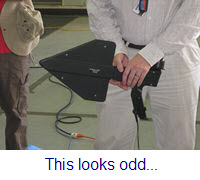 In Ben’s first post about team LaserMotive, he talks about how this team is using a laser supplied by DILAS.  They are in the minority here, with only the McGill team joining them in using this system.  The other four competitors are all using laser power supplied by TRUMPF.  Because of this, there was only some reflectivity testing done onsite during the recent tests at Dryden – the main testing needed to be done at the LaserMotive facility.

In the second post about LaserMotive’s qualification testing (which was done onsite at the LaserMotive facility), Ben writes in more detail about LaserMotive’s power source.  Money quote: “The system uses two parallel beams, which originate in the two cube like devices at the back, are folded over several times as they bounce between the mirrors, and eventually exits through the top hatch after having bounced from the large bottom mirror. For testing, a last mirror is introduced at the top, diverting the beam so it comes out horizontally out the back of the trailer.” 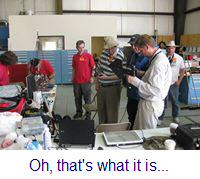 In the third post, Ben writes about how LaserMotive has their laser doing double-duty; powering a climber and cooking hot dogs.  What, no beer?

And in the fourth and final post (so far) about this team, Ben writes about the Climber “Melt Test”.  In previous Games, the main issue was “Shake, rattle and roll” – worrying about how the climber would handle the wind and the subsequent twisting and oscillating of the tether.  That is not so much a worry this year as the climbers are not climbing a tether, but rather a steel ‘rope’ (cable).  There’s not much cross section for the wind to grab hold of.  The teams (and Ben) ARE worried about if the climber can take the laser at full power for the length of the climb (plus some margin).  Ben doesn’t give us the actual numbers, but you’ll note that he had no complaints.

Check out these posts that Ben has put up – they’re most informative and fun to read.  He has several pictures included, some taken by him and a couple taken by yours truly.  You might also want to read a couple of previous posts (here and here) that I had put up about DILAS.

(You can view larger versions of the pictures by clicking on the picture thumbnails.  These pictures show NASA personnel doing their own testing of the LaserMotive climber)