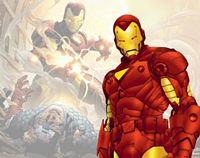 I’m not a big comic book fan, and haven’t kept up with all of the creations in the Marvel Universe.  However, even I have heard of Tony Stark, aka the Iron Man.

Evidentally, he’s outlived his usefulness, so his demise may be in the works.  In November, Marvel Comics is scheduled to release “Iron Man: The End” in which:

“Decades in the future, a 70+ Tony Stark is overseeing his ultimate project of his lauded career—the completion of Earth’s first commercial space elevator, whose inauguration will change the world’s economy and the future of space exploration forever. However, not everyone is looking forward to this project’s launch with the same enthusiasm as the head of Stark Universal. Sinister forces are at work, behind-the-scenes, to insure that Stark’s pinnacle scientific achievement ends in disaster.”

It looks like EVERYONE wants to destroy the Space Elevator.  Guess we’re just going to have to build a bunch of them…

This is one comic book I’m going to buy.  No one can doubt the talent and creativity of the Marvel artists and I’m looking forward to their “concept drawings” of a Space Elevator.

(Picture of Iron Man from here.  Click on it for the larger version)

1 thought on “Iron Man to build the Space Elevator!”