No, this is not going to be my last post on events at this year’s Space Elevator Conference, but I wanted to let people know that the conference has ended and to summarize it a bit…

I will be doing additional posts about presentations and goings-on at the Conference over the next few weeks, interspersed with other Space Elevator-related news as it happens. 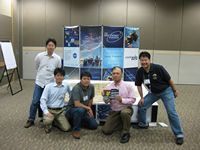 IMHO, the Conference was a big success.  The enthusiasm level of the attendees was quite high, aided especially by the Japanese contingent.  I’ve blogged about their contribution before, but want to emphasize it again.  This group is very serious about building a Space Elevator.  The Japan Elevator Association (JSEA) is holding their own Space Elevator conference this year on November 15th and 16th and I’ve all but committed to go.  I’ll be doing a separate post about some of the things they proposed.

We also had a few other non-American presenters, but not many.  This is something we have to change in the future.  We need this to be more of an international effort – and that leads me to the subject of the Four Pillars, a topic which consumed much of Saturday’s Conference proceedings.

The “Four Pillar” concept is certainly not new.  It’s been used for other infrastructure projects, and it’s even been tried before for the Space Elevator.  LiftPort unsuccessfully tried to get some traction with this idea and it was also started (and then died out) at last year’s Space Elevator conference.  But the idea is too good to be discarded, even in the face of previous failures.

There was a new committment evident at this year’s conference and, for the first time, we have a very realistic possibility of enlisting international resources to help make this happen.  In addition, the technology to build a Space Elevator, especially in the carbon nanotube arena, is rapidly maturing. 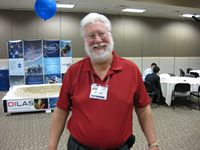 If you would like to get involved with this effort, please email me at Ted [AT] SpaceElevatorBlog.com.  There will be much more information about this Four Pillar effort posted on this blog in the coming months.  This picture is of Dr. Swan, one of the co-chairs of this Pillar (along with yours truly) – I’m sorry it’s a bit blurry, but the guy never stands still! 🙂

The Conference facilities were superb – Microsoft deserves many kudos for how this conference center was set up.  Bryan Laubscher, one of the conference organizers, suggested that future US Space Elevator conferences be held here, at the same place, and I heartily concur.  Maurice Franklin, a Microsoft employee for many years (he’s retiring this year and moving to New England to study boat-building) deserves special thanks for these facilities as he is the person who organized getting these facilities for us.  He was also the guy who we all went to when we had a problem/question with any of the AV equipment or anything else.  I never saw a problem he did not handle, and handle quickly and efficiently.  Thanks Maurice – and good luck on your new endeavours… 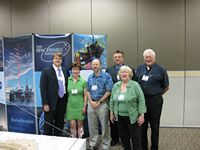 I want to wind up this wrap-up post with a big “Thank You” to all of those who organized this year’s Conference.  Doing something like this is a huge and largely thankless task.  I’ve signed up to help organize next year’s conference and I’m sure we’re going to be leaning on the expertise of this year’s organizers.  This photo shows those six people who we can thank for making this conference a success.  From left to right they are Bryan Laubscher, Carla Sabotta, Maurice Franklin, Martin Lades, Ruth Richter and Phil Richter.  Each and every one of these people deserve a tremendous “Thank You” from all of us.